The chronological passage of the hours, days, and years on clocks and calendars is a steady, measurable phenomenon. Yet our perception of time shifts constantly, depending on the activities we’re engaged in, our age, and even how much rest we get. A paper in the journal European Review by Duke University mechanical engineering professor Adrian Bejan, explains the physics behind changing senses of time and reveals why the years seem to fly by the older we get.

Bejan is obsessed with flow and, basically, believes physics principles can explain everything. He has written extensively about how the principles of flow in physics dictate and explain the movement of abstract concepts, like economics. In 2018, he won the Franklin Institute’s Benjamin Franklin Medal for “his pioneering interdisciplinary contributions…and for constructal theory, which predicts natural design and its evolution in engineering, scientific, and social systems.”

In his paper, he examines the mechanics of the human mind and how these relate to our understanding of time, providing a physical explanation for our changing mental perception as we age.

According to Bejan—who reviewed previous studies in a range of fields on time, vision, cognition, and mental processing to reach his conclusion—time as we experience it represents perceived changes in mental stimuli. It’s related to what we see. As physical mental-image processing time and the rapidity of images we take in changes, so does our perception of time. And in some sense, each of us has our own “mind time” unrelated to the passing of hours, days, and years on clocks and calendars, which is affected by the amount of rest we get and other factors. Bejan is the first person to look at time’s passage through this particular lens, he tells Quartz, but his conclusions rest on findings by other scientists who have studied physical and mental process related to the passage of time.

These changes in stimuli give us a sense of time’s passage. He writes:

The present is different from the past because the mental viewing has changed, not because somebody’s clock rings. The “clock time” that unites all the live flow systems, animate and inanimate, is measurable. The day-night period lasts 24 hours on all watches, wall clocks and bell towers. Yet, physical time is not mind time. The time that you perceive is not the same as the time perceived by another.

Time is happening in the mind’s eye. It is related to the number of mental images the brain encounters and organizes and the state of our brains as we age. When we get older, the rate at which changes in mental images are perceived decreases because of several transforming physical features, including vision, brain complexity, and later in life, degradation of the pathways that transmit information. And this shift in image processing leads to the sense of time speeding up. 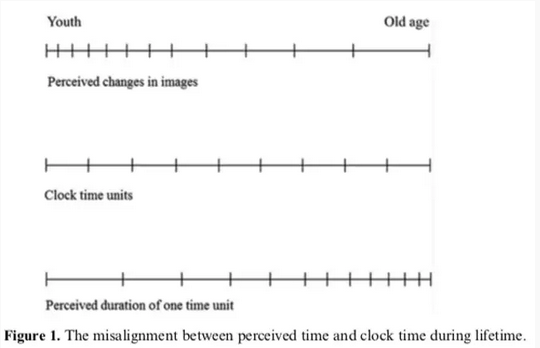 This effect is related to saccadic eye movement. Saccades are unconscious, jerk-like eye movements that occur a few times a second. In between saccades, your eyes fixate and the brain processes the visual information it has received. All of this happens unconsciously, without any effort on your part. In human infants, those fixation periods are shorter than in adults.

There’s an inversely proportional relationship between stimuli processing and the sense of time speeding by, Bejan says. So, when you are young and experiencing lots of new stimuli—everything is new—time actually seems to be passing more slowly. As you get older, the production of mental images slows, giving the sense that time passes more rapidly.

Fatigue also influences saccades, creating overlaps and pauses in these eye movements that lead to crossed signals. The tired brain can’t transfer the information effectively when it’s simultaneously trying to see and make sense of the visual information. It’s designed to do these things separately.

This is what leads to athletes’ poor performance when exhausted. Their processing powers get muddled and their sense of timing is off. They can’t see or respond rapidly to new situations.

Another factor in time’s perceived passage is how the brain develops. As the brain and body grow more complex and there are more neural connections, the pathways that information travels are increasingly complicated. They branch like a tree and this change in processing influences our experience of time, according to Bejan. 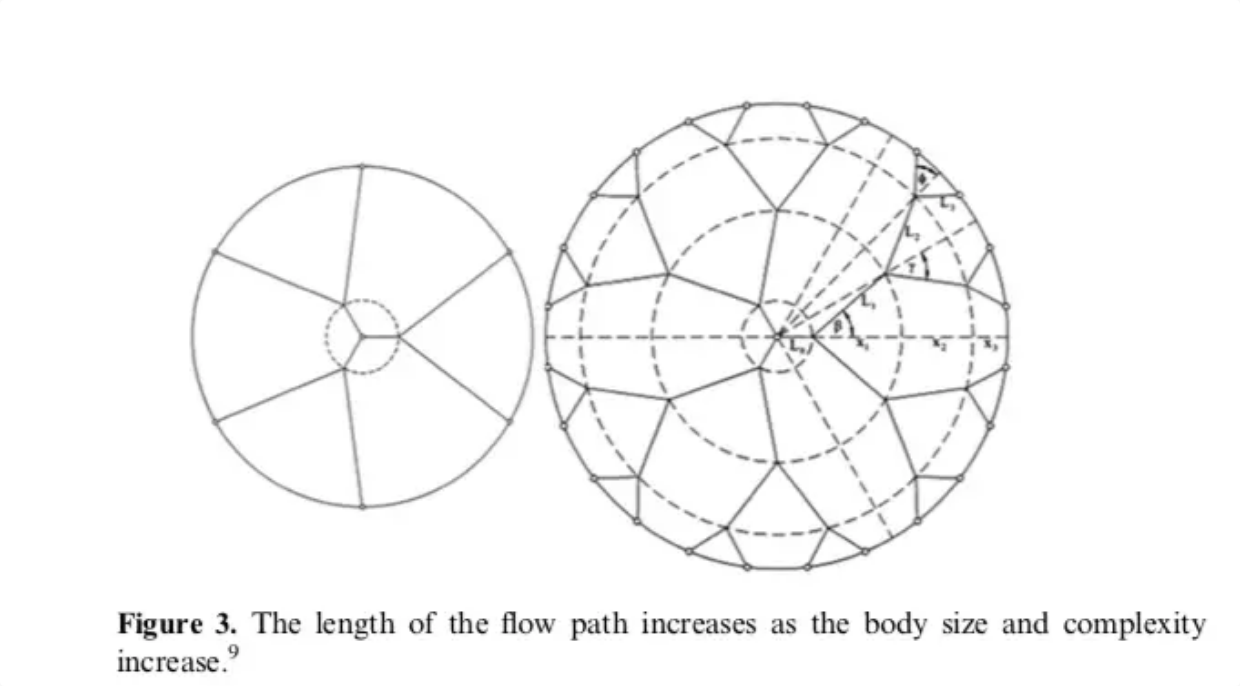 The brain’s complexity changes our sense of time. From Adrian Bejan.

Finally, brain degradation as we age influences perception. Studies of saccadic eye movements in elderly people show longer latency periods, for example. The time in which the brain processes the visual information gets longer, which makes it more difficult for the elderly to solve complex problems. They “see” more slowly but feel time passing faster, Bejan argues.

A Lifetime to Measure By

Bejan became interested in this topic more than a half century ago. As a young athlete on a prestigious Romanian basketball team, he noticed that time slowed down when he was rested and that this enabled him to perform better. Not only that, he could predict team performance in a game based on the time of day it was scheduled. He tells Quartz:

Early games, at 11 a.m., were poor, a killer; afternoon and evening games were much better. At 11 AM we were sleepwalking, never mind what each of us did during the night. It became so clear to me that I knew at the start of the season, when the schedule was announced, which games will be bad. Games away, after long trips and bad sleep were poor, home games were better, for the same reason. In addition, I had a great coach who preached constantly that the first duty of the player is to sleep regularly and well, and to live clean.

Now he’s experienced how “mind time” changes over the much longer span of his whole life. “During the past 20 years I noticed how my time is slipping away, faster and faster, and how I am complaining that I have less and less time,” he says. It’s a sentiment he hears echoed by many around him.

Still, he notes, we’re not entirely prisoners of time. The clocks will continue to tick strictly, days will go by on the calendar, and the years will seem to fly by ever faster. By following his basketball coach’s advice—sleeping well and living clean—Bejan says we can alter our perceptions. This, in some sense, slows down mind time.